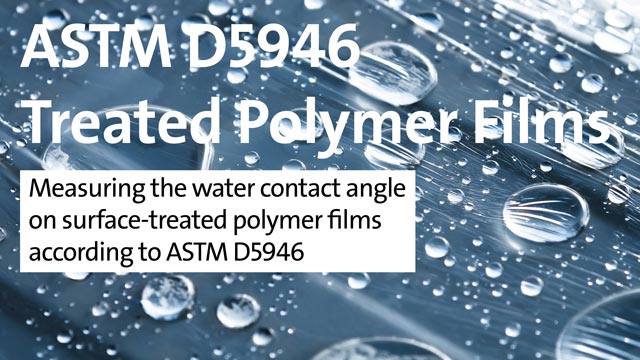 Surface treatments are an effective way to overcome adhesion problems in chemically inert and non-porous surfaces with low surface energy. They are of great importance in many fields, such as the coating, printing, and varnishing industries. Several surface-treating-techniques, such as plasma-treatment and corona-treatment, have been developed to improve the wetting behaviour. Generally stronger treatment leads to better wettability and adhesion characteristics of the treated surfaces. The contact angle is a crucial parameter that reflects the effectiveness of the surface treatment. The ASTM D5946 [1]: Standard Test Method for Corona-Treated Polymer Films Using Water Contact Angle Measurements is a widely used method to determine the effectiveness of different surface treatments. In the following, the application of the ASTM D5946 will be presented using an optical contact angle measuring system of the OCA series (Fig. 2) from DataPhysics Instruments.

Thus, systems of the OCA series are suitable for determining the wettability of treated films according to ASTM D5946. 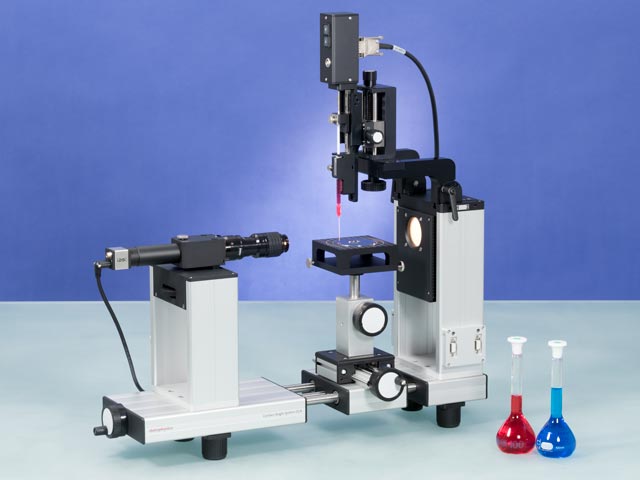 In this application note, the water contact angles on differently treated polymer films were determined with an OCA 25. According to the requirements of the ASTM D5946, the width and length of sample film are at least around 25 mm and 300 mm, respectively. As environmental conditions will influence the measured value to a certain extent, the tests are conducted at a temperature of 23 ± 2 °C and a relative humidity of 50 ± 10%. The handling of polymer films is prone to build-up of static charges, which potentially leads to inaccurate contact angle measurements. To avoid this, an air ioniser is used to keep the samples free of static build-up before and during the measurements.

As mentioned above, both plasma-treatments and corona-treatments can be applied to treat polymer surfaces. In this application, the sample film was plasma-treated immediately before the measurements using the handheld piezobrush® PZ3 (with the Module Standard), developed by relyon plasma GmbH. The test areas were treated for 3 s, 5 s, 10 s, 20 s and 30 s, respectively.

To ensure the purity of the distilled water and cleanness of the syringe, a preliminary test was carried out. In it, the surface tension of the water used for the later measurements was verified tree times using the pendant drop method. The measurements yielded a surface tension of 72.28 ± 0.32 mN/m, which is in good agreement with literature values [2]. 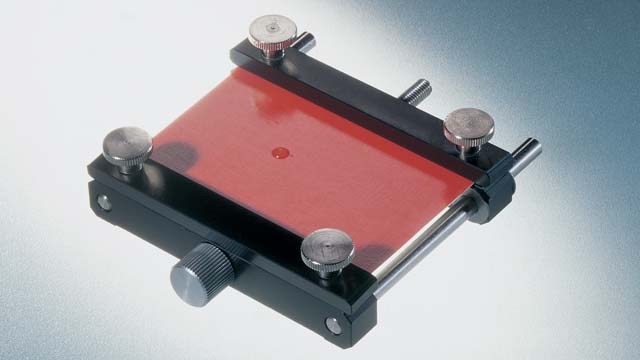 Fig. 3: The film and paper holder FSC 80 can be used to fix thicker films or papers with adjustable tension.

To ensure the accuracy and reproducibility of the results, the samples were taken out of their packaging and placed on the device extremely carefully without directly touching the test area. The sample film was fixed inside the film and paper holder FSC 80 (Fig. 3) and vertically oriented on the sample stage of the OCA 25. The film holder made it possible to easily position the sample wrinkle free.

A water droplet of 6 μL, which lies within the ASTM standards range of 5 to 8 μL, was suspended at the end of a syringe needle. The sample platform was raised slowly until it touched the pendant drop. Then, the sample platform was moved down carefully to complete the transfer of the droplet to the sample film. Taking into account the possible variations in treatment and surface roughness of the sample films, measurements were carried out ten times per sample. Additionally, one contact angle measurement is taken every 25 mm across the sample, to determine any changes across the surface.

With the automatic evaluation function of the software, the mean static water contact angles on the treated and untreated samples were obtained using an elliptical fit to the drop shape.

Fig. 4 shows the static contact angles determined for the studied samples. There were only small deviations within the ten repetition measurements for the same sample, which results in low error bars (max. ± 2.9°).

Table 1: The level of surface treatment of polymer films with initially low surface energies is defined in the ASTM D5946 according to the range of water contact angles.

The optical contact angle measuring and contour analysis system of the OCA series from DataPhysics Instruments provides an easy and reliable way to determine the static contact angle on treated and untreated film surfaces. Hence, the level of surface treatment according to ASTM D5946 can be evaluated accurately.

This technique is one of the most powerful methods to study the wetting behaviour of treated surfaces, which is very important in the development of surface treatment methods.