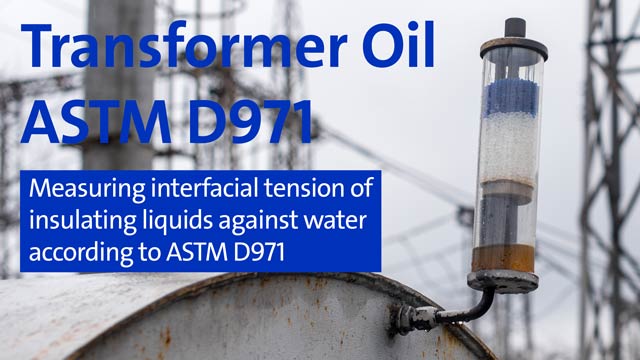 Monitoring the degradation of insulating oil at an early stage is integral for detecting incipient faults within a transformer and avoiding catastrophic failures. The interfacial tension (IFT) is commonly considered to be an effective index for evaluating deterioration with increasing age, due to its high sensitivity to contaminants and impurities.

The ASTM D971 [1]: Standard Test Method for Interfacial Tension of Insulating Liquids Against Water by the Ring Method is a widely used standard method to examine the quality of insulating oil. In the following, the application of the ASTM D971 will be presented using a tensiometer of the DCAT series (Fig. 2) from DataPhysics Instruments.

where L is the circumference of the ring, mmax is the maximum mass of the pulled lamella and g is Earth’s gravitational acceleration of approximately 9.81 m/s2.

The difference between the apparent and “actual” interfacial tension is corrected by the ring correction factor f. The tensiometer software DCATS offers correction factors according to various authors like Huh-Mason, Zuidema-Waters, or Harkins-Jordan.

A tensiometer of the DCAT series from DataPhysics Instruments is a universal measuring system for force-based studies of interfacial parameters and phenomena. With comprehensive software modules and standard test bodies, such as the Wilhelmy plate or the Du Noüy ring, it can determine the static, as well as time- and temperature-dependent IFT, thanks to its precise weighing system. Tensiometers are particularly useful for studying opaque liquids or liquids with similar refractive indices i.e., when the limits of optical contour analysis are reached.

Hence, a DCAT is the ideal device for measuring the interfacial tension of transformer oil against water according to ASTM D971, as will be shown in this note. 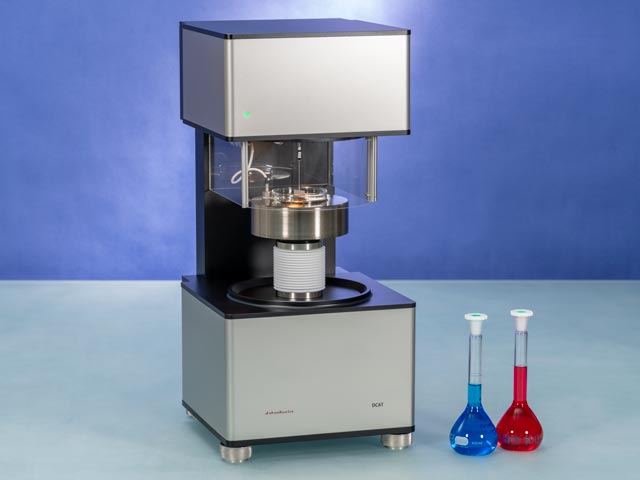 In this application note the interfacial tension of transformer oil against water was determined using a DCAT 8T with a Du Noüy ring RG 11. According to the requirements of the ASTM D971, rings should be made of platinum or platinum-iridium alloy with a minimum circumference of 40 mm and wire diameter of about 0.3 mm. In addition, the ratio of the outer ring radius (R) and the wire radius (r) should be known (R/r) to at least three significant figures. Stirrups should be at least 25 mm long. A Du Noüy ring RG 11 fits those criteria and is therefore suitable for the experiment.

In order to calculate the ring correction factor f the density difference of water and oil has to be known. Thus, the experiment was conducted in two parts: (I) Density determination of sample oil; (II) Interfacial tension measurement.

Note that the sample vessels were cleaned with water, followed by a rinse in acetone, then thoroughly rinsed again with tap and distilled water and dried before usage.

I: Density of sample oil 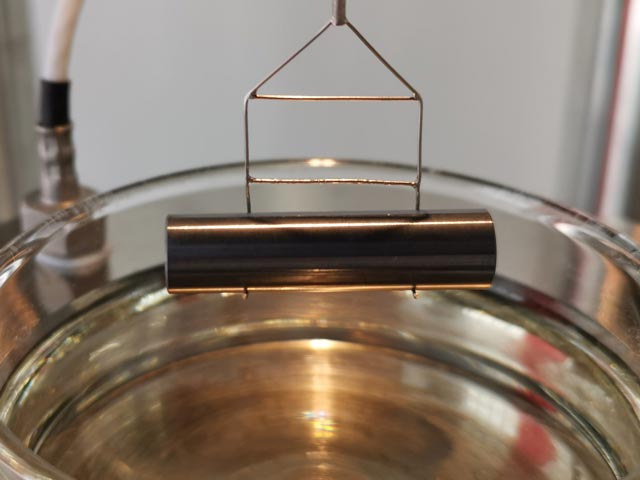 The ring was thoroughly cleaned and annealed inside the flame of a Bunsen burner directly before usage (Fig. 4).

To ensure the purity of the distilled water, the cleanness of the sample vessel and the accuracy of the ring dimensions, a preliminary test was carried out. The distilled water at room temperature was filled into a clean vessel with a depth of around 10 to 15 mm. No foam should be visible at the water surface. Foam indicates that the water is contaminated, or the vessel is not clean. The vessel was placed on the sample stage of the DCAT 8T. The ring was placed into the coupling lock of the measuring balance. The method ‘Normal Ring – RG 11’ in the software module ‘Surface Tension’ was selected and the surface tension of distilled water was automatically determined to be 72.8 mN/m, which is in good agreement with literature values [2]. 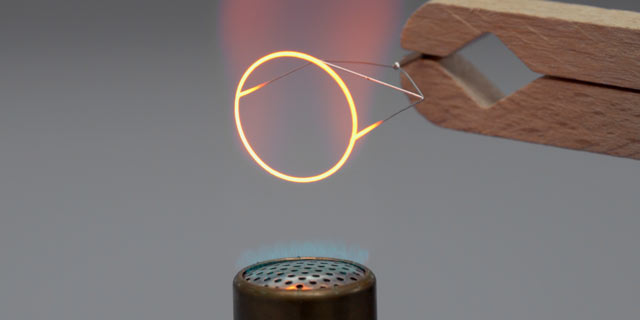 Fig. 4: The ring is annealed inside the flame of a Bunsen burner.

After repeating step a) the ring was placed into the coupling lock of the measuring balance. The method ‘ASTM D971’ in the software module ‘Interfacial Tension’, was selected for the measurement. The system automatically raised the sample stage until the ring was immersed in the water with a depth of 3.5 mm (< 6 mm). Then, the system waited for the oil to be added. The test oil was carefully layered on the water surface using a pipette. Meanwhile the ring was still submerged in the water (Fig. 5 left). Oil was added until a layer thickness of about 11 mm (> 10 mm) was reached, as it should not cover the cross bar of the test ring (Fig. 5 right). Once the last drop of oil was added onto the water, the oil-water interface was left undisturbed for around 30 s.

Fig. 5: The oil is carefully added onto the water surface using a pipette.

Choosing to continue in the software the sample stage was automatically lowered at a speed of 0.2 mm/s and the changes of lamella weight against position were recorded. The maximum weight of the lamella (Fig. 6) was detected by the software and the interfacial tension calculated automatically, including the chosen ring correction. 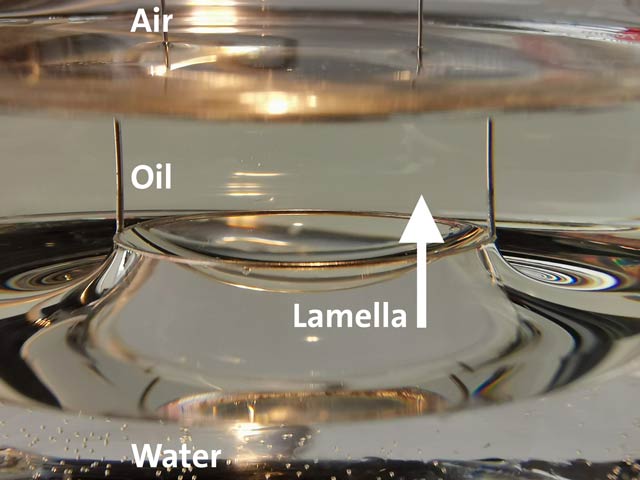 Fig. 6: A lamella forms when the ring is pulled out of the water.

The tensiometers of the DCAT series with their comprehensive software from DataPhysics Instruments can be used to easily and reliably measure the interfacial tension of oil against water according to ASTM D971, and hence provides a fast and simple way to determine the quality of insulating oil.