Application example: How zeta potential measurements can help to clean your clothes

How zeta potential measurements can help to clean your clothes 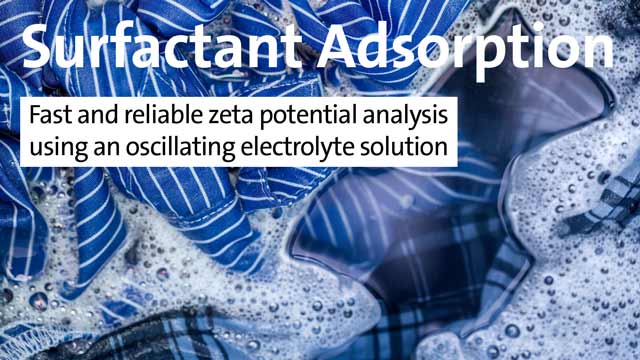 Most surfaces develop a surface charge when they come into contact with liquids. In front of the surface the so called electrical double layer forms which consists of an immobile and a diffuse layer. The potential inside the immobile layer is experimentally inaccessible but is also not relevant for practical applications. The potential at the transition between immobile and diffuse layer on the other hand can be measured. By moving the liquid and the surface relative to each other the ions inside the diffuse layer can be sheared of. The electrical potential at this shear plane is called zeta potential (ζ potential).

The ζ potential directly influences the stability of colloidal suspensions and gives indications on the adhesion between solids. Furthermore, the ζ potential can be used to monitor the adsorption and chemical reaction of ions/molecules, surfactants, polymers etc. with the solid surface.

Conventional methods to determine the zeta potential are intricate and time-consuming. The bidirectional oscillating streaming potential analysis that has been patented by DataPhysics Instruments on the other hand presents a fast, easy to use and reliable new approach to the analysis of zeta potentials.

During the sinusoidal oscillation of electrolyte solution, the generated pressure difference Δp is changed rapidly. With each generated pressure a corresponding streaming potential Ustr is measured. With knowledge of electrolyte specific parameters, the zeta potential ζ is calculated using the Helmholtz-Smoluchowski equation, where η is the viscosity, εr the relative permittivity of the solvent, ε0 the absolute permittivity of vacuum and κ the conductivity:

Bidirectional oscillating streaming potential analysis
DataPhysics Instruments patented a measuring technique that uses an oscillatory flow of electrolyte solution through or along the sample which is the basis of the innovative Zeta Potential Analyzer ZPA 20. The streaming potential and the currently applied pressure are measured simultaneously together with the temperature, conductivity and pH value of the electrolyte solution. Through the wide range of applicable flow frequencies and amplitudes a fast and precise measurement is possible.

By manually or automatically dosing liquids directly into the electrolyte chamber the electrolyte properties like pH value, conductivity or surfactant concentration be changed. A rapid equilibration of the electrolyte is ensured by the constant oscillatory motion. Hence, even fast adsorption or reaction processes can be observed.

Reischl et al. investigated the adsorption of surfactants on polymer fibers in order to optimize the industrial textile finishing process. Due to the fast measurement system it was possible to measure the adsorption kinetic of the surfactant which would not be possible with conventional methods that measure the zeta potential in a steady state. First The pH dependency of the zeta potential and the isoelectric point (IEP) of three textile fibers were determined. Then the adsorption behavior of five surfactants, which are commonly used in the textile industry were determined under equilibrium conditions.

In Addition, the kinetic of surfactant adsorption was determined (see Fig.). After a measuring time of 10 s a cationic surfactant was added and after another 50 s the equilibrium state was reached. Adsorption kinetics play a major role during process development and optimization. Understanding the adsorption behavior can help to identify the most suitable surfactant for an intended process or to adapt the process to a new surfactant or textile fiber.

The work demonstrates that the streaming potential method utilizing an oscillating electrolyte solution flow is a fast and reliable way to determine the zeta potential of fibrous samples with a high sample-throughput. Furthermore, it is possible to monitor time-dependent changes of the zeta potential on shortest time scales previously unexplorable.

Fast zeta potential change of cationized cellulosic fiber after the addition of a cationic surfactant at 10 s.

For more information please refer to the original publication: