Application example: How contact angle measurements can help the fight against cancer

How contact angle measurements can help the fight against cancer 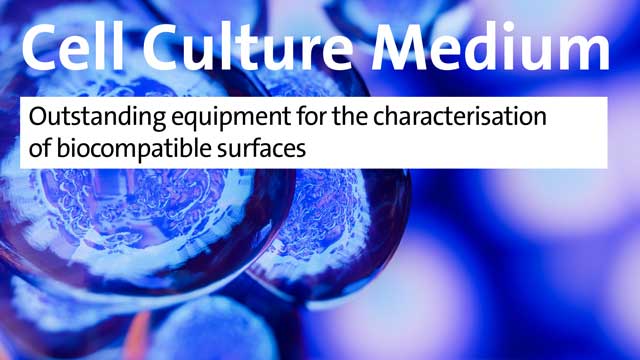 Culturing cancer stem cells (CSCs) in vitro and studying their biological behaviours is an important method in cancer research that helps to understand their crucial role in tumour invasion, metastasis and recurrence. One of the keys to a successful anti-tumour medication is that it specifically targets CSCs. However, only few tumour cells are CSCs so enriching and culturing CSCs to generate sufficient amounts in vitro is essential to gain a deeper understanding.

Currently, 3D scaffolds are being used to investigate the behaviour of tumour cells and enrich CSCs, but their low throughput and complicated production process impedes their wide application. Developing an efficient way of isolation, enrichment and culturing of CSCs in vitro is therefore an extremely important and necessary task.

Recently, Fu et al. [1] reported an efficient and economic strategy in which normal filter paper can be used as a cell culture platform to realise the enrichment of CSCs in vitro. What inspired them to use simple filter paper for CSCs culturing? One criterion to identify CSCs presence in a cell culture medium is their formation of 3D sphere-shaped structures. These cell culturings are usually carried out with ultra-low attachment culture platforms. The low-adhesion surface has a high hydrophilicity that can drastically inhibit hydrophobic interaction-induced cell adhesion.

In addition, previous reports have already verified that a high hydrophilicity is favourable for 3D-sphere formation. On the other hand, plenty of studies have presented that paper has not only high biocompatibility, but also hydrophilic cellulose fibres and fibrous porous structure that can provide a 3D scaffold and nutrient to imitate a suitable micro-environment for cell growth. Thus, they concluded that CSCs should grow well on paper-based substrates and set out to prove it.

In this study, prostate cancer cell lines (DU 145 and LNCap) were cultured on commercial tissue culture plates (TCPs) and filter papers with the same culture conditions. The cells grown on TCPs and on filter paper showed noticeable differences after 48 hours.

The cells on TCPs showed the normal cell proliferation characteristic with trigonal morphologies. In contrast, the cell aggregates on filter paper presented a uniform distribution, especially at the niches between cellulose fibres spheroids were found. Furthermore, it is reported that the aggregation and spheroid formation of cells in 3D scaffolds from polymeric materials takes 5–10 days or even several weeks, whereas the authors observed a spheroid formation on the filter paper scaffold in only 24 hours.

From these results, it can be concluded that cells spheroid formation can be achieved very well on the filter paper. Having found that isolation and culturing of the spheroidal cells for analyses in vitro and drug development can be realised on filter paper the authors set out to find the most suitable type of paper.

To get an insight on the effects of paper materials on the cell spheroid formation, the study employed hydrophilic rice paper and filter paper as cell culture platforms. The cell tests showed that 3D spheroids were spontaneously formed on the filter paper, whereas the cells on the rice paper displayed polygonal or trigonal morphologies comparable to the observation on TCPs. To understand the reasons for this different behaviour, the physicochemical properties of these two paper materials were investigated.

SEM measurements showed that the secondary structure around cellulose fibres of rice paper were much smoother than for the filter paper. The two paper materials also presented very different hydrophilicity. Contact angle measurements where conducted using an optical contact angle measuring and contour analysis system of the OCA series. A water contact angle of about 53° was observed on the rice paper while the wettability of filter paper was so good that it lead to complete spreading.

From these findings the authors concluded that cell adhesion is delayed on filter paper because of the strong hydrophilicity. The cell docking was facilitated by fluffy structure around cellulose fibres that provide sufficient porous niches, so that the cell spheroids formation was promoted.

Overall, this work demonstrates that biocompatible, low-cost filter papers can be applied efficiently to isolate and enrich CSCs in sufficient amounts and good stemness. Besides, the authors suggested that the wettability properties and the fluffy structure of filter paper have beneficial effects on the cell spheroids formation. Cells cultured on filter paper are an ideal cost efficient way to isolate CSCs for anti-tumour drug research. For more information, please refer to the following article: