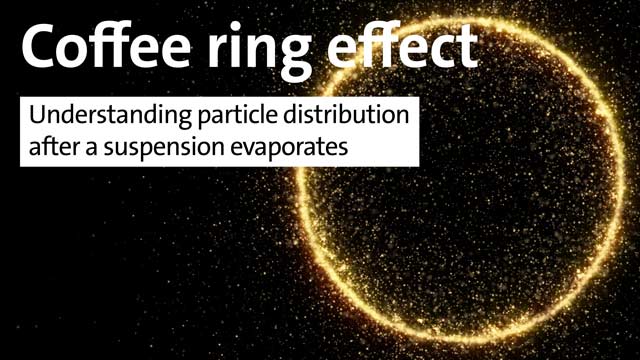 Studying how droplets, that contain solid particles, evaporate from a solid surface reveals a perplexing procedure. The combination of mass and heat transfer lead to intriguing phenomena, such as the coffee-ring effect, which describes the evaporation of colloidal droplets on a solid surface, generating non-uniform ring-like depositions. The results of this process have an impact, in many research areas, where a uniform particle deposition is a crucial requirement, such as biosensors, inkjet-printing, photonics and others. Recently, Butt et al. reported that control and regulation of the evaporation of water droplets, on oil-coated surfaces, can suppress the coffee-ring effect and produce asymmetric supraparticles.

How can the coffee ring effect be avoided, and a uniform deposition guaranteed?

Top: Evaporation process of a water-based suspension leading to the coffee ring. Bottom: Oil coated surface suppresses evaporation below the liquid-liquid-air contact line (LLA-CL) and leads to a uniform deposition of particles.

Moreover, the figure illustrates that there is a tendency for colloidal particles to be transported to the upper interface (LLA-CL) and accumulate there. This phenomenon is a result of hindered evaporation, both on the oil-coated water drop surface, and from the bottom edge LLS-CL. Only at the uncovered area of the droplet evaporation can occur freely. This localised evaporation results in an upward flow, of particulate matter inside the drop, which, in the first instance, concentrates the dispersion towards the upper surface of the drop, during the evaporation and facilitates a uniform deposition on the substrate. The oil viscosity, film thickness, droplet size, and concentration of the colloids were all found to influence the deposition pattern.

Fluorescent polystyrene particles were used as tracers and observed by confocal microscopy in order to get a deeper understanding of the particle flow during evaporation. The results show that the droplets deposition radius on the oil-coated surfaces decreases with time, while the contact angle at the droplet edge changes only slightly. This phenomenon indicates that the droplet edge is continuously receding and the pinning of particles, to the substrate surface, is not an immediate effect.

Visualisation of the coffee ring effect

With the Surface Profile Analyzer SPA 25 the deposition of particles can be analysed and visualised with exceptional resolution. Hence, for example the ring-like structures left behind by a particle-based silver ink could be analysed. Smallest individual droplets of the silver ink were dosed onto a substrate using the picolitre dosing system PDDS. After the ink dried the coffee ring effect was observed and the sample analysed with the SPA 25.

An optical contact angle measuring and contour analysis system of the OCA series and a tensiometer of the DCAT series were used in this research. For more information, please refer to the original publication: